I had planned on writing this post two weeks ago, just after we arrived back in Germany. However there was a slight change of plan, I was taken in to hospital on Wednesday with a kidney stone and was not discharged until Thursday. I am basically back to my normal self now thankfully! It was my first time as a patient in hospital and it was in another country but everyone was really friendly! Tim was a star translating everything when I was in too much pain to even think in German let alone speak it! All of the Doctors kept telling me that kindey stones are more painful than child birth… I wasn’t sure if that was helpful at the time or not!

I have had quite a stressful week, on top of  the kidney stone I have been having to get back in to driving after a 4 year break from it. I am also driving on the right hand side of the road for the first time. I am a nervous driver at the best of times but as I know I have to drive myself to work for the first time on Wednesday it is added pressure for me. I have also been teaching my final few english lessons! Phew!

I have also just bought all of my uniform for my job! Which has made me excited! Who knew that chef trousers were so expensive!

Last weekend we went to Kassel for the weekend for a friends 70th birthday which was great fun. It was really nice to speak to a wide range of German people and get some good language practice in!

I wanted to do a quick post about what we got up to while we were in England. We were home for around 3 and a half weeks so it was really nice to catch up with everyone. Tim and I are from Norfolk in the east of England and it is such a good place to visit. One of the main reasons we went home was for our wedding celebration!

We had planned on getting married this August, however when we moved to Germany, for various boring reasons, it became apparent that we had to get married here. So in November we had a small ceremony with our parents, my sister and two friends. Our celebration a few weeks ago was basically the same as we had planned. We had a lovely outdoor blessing and then proceeded to eat lots of food and catch up with our friends as well as having our photos on the beach 🙂 A lot of our friends have never been to Norfolk before so we arranged a beach trip the day before so they could meet each other before hand.

We also had a fairly brilliant pudding table! The bottom tier of our wedding cake was raspberry and white chocolate and the top tier was mango. The venue we used for our reception made everything else and did such an amazing job! There is a huge variety of things including lemon meringue cones, macarons, fruit tarts, chocolate brownies, berries and a few more bits and pieces! 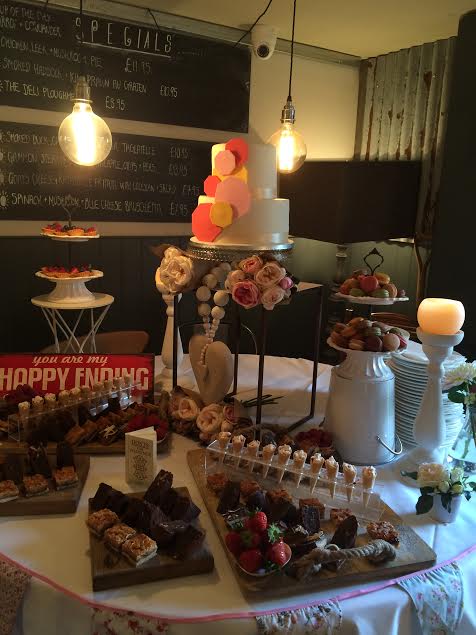 The rest of our holiday was spent seeing friends and family, visits to the beach and watching my cousin play cricket! If you have never been to Norfolk I would strongly recommend going for a weekend! I also had a fairly epic peanut butter blondie from Stiffkey Stores. We first discovered this shop/ cafe while camping in Stiffkey when Tim and I first met, they make the best brownies!

This weekend Tim took me on a trip to the black forest! We had an amazing time but I will tell you more about that in another post!

Today I am having a fairly lazy day as tonight is my first shift as an apprentice pastry chef! Eeeek! I will maybe give you a quick update tomorrow!

If you haven’t seen this month’s food exchange post you can have a look here!

4 thoughts on “Tuesday 1st September (My summer in England)”