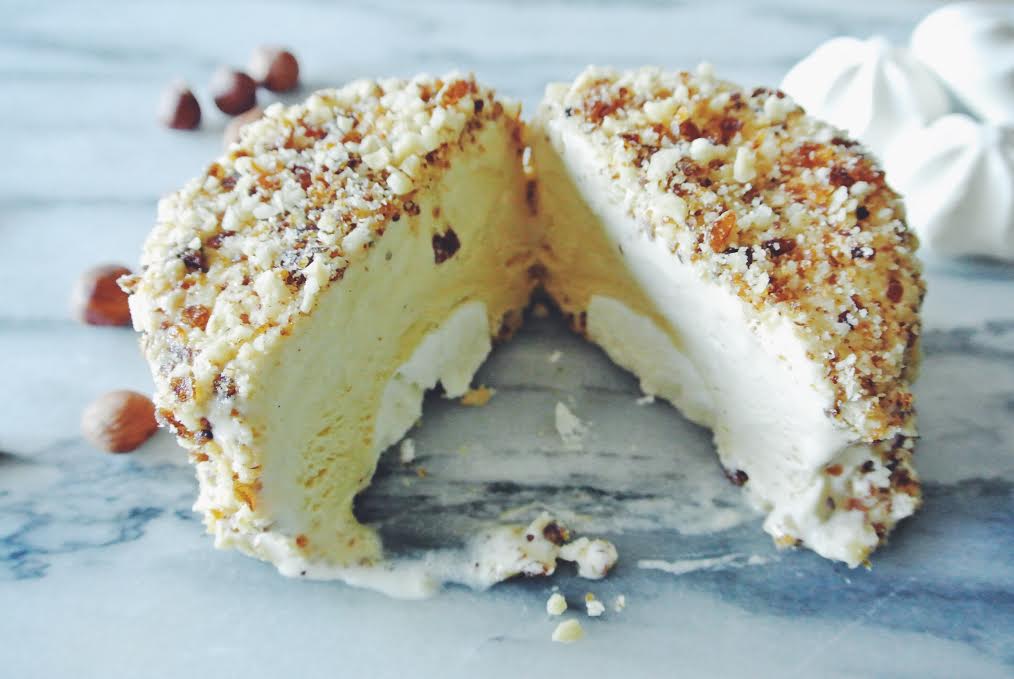 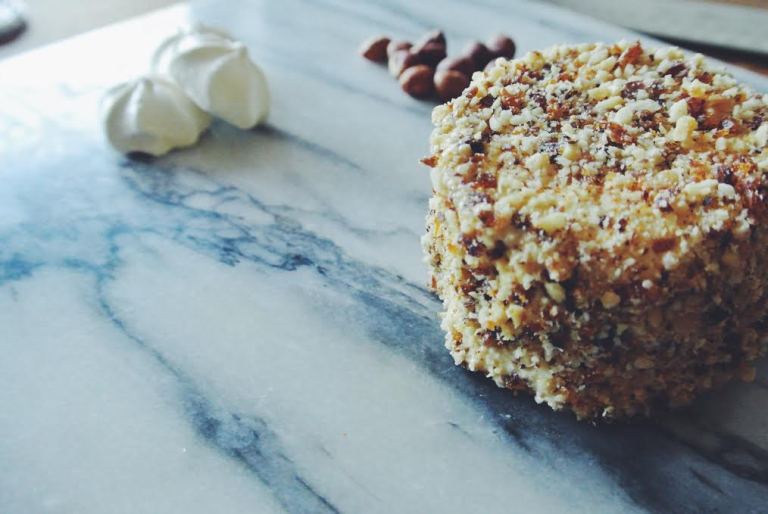 I first became aware of this dessert in September when my Dad came to visit us in Germany for the first time. He loves France so we went across the border and found a really nice restaurant by a river for dinner. When it came to dessert we could translate everything on the menu apart from the Mystère. So my Dad ordered it. What arrived was very simple but very tasty! It is a dome of vanilla icecream, covered in sweetened hazelnuts and with a meringue centre. You can buy these in the frozen section of French supermarkets.

As I keep mentioning, it has been ridiculously hot here. So we have been trying to use the oven as little as possible, otherwise the kitchen becomes unbearably hot!! Which means I haven’t baked anything in about a week and a half. I have been missing baking so I tried to think of something I could make without using the oven, then I thought of this!

This is a bit of a cheats recipe but the aim was to cut back the use of the oven and the cooker as much as possible! If you wanted to make this recipe extra special you could make your own icecream and meringue!

I hope you enjoy the recipe!

Variation- My Dad likes to crush the meringues and mix with a tablespoon or two of nutella before putting it in the middle!

Start by lining 4 ramakins with clingfilm, make sure you push the clingfilm right in to the edges. Make sure you leave enough clingfilm over the edge so you can get the icecream out of the ramakin.

Fill to just under the rim of the ramakin with icecream. Make sure you press the icecream down as you don’t want holes in your dessert!

Push your small meringue or meringue pieces into the center of the icecream until the top is completely level.

Put in the freezer for an hour.

Meanwhile, melt the sugar in a small saucepan. Once it has melted to a nice golden colour add your hazelnuts and stir. Take off the heat and allow to cool for a few minutes.

Transfer the mixture in to a food processer and pulse until it is a breadcrumb like consistancy. It doesn’t matter if there are a few lumps as it will give your dessert more texture.

transfer into a wide bowl.

Take your icecream out of the freezer. Allow to stand at room temperature for around a minute before pulling out of the ramakin. Peel the clingfilm off of the icecream. Roll the icecream in the hazelnut mixture until all sides are covered.

💙 my baking looks a little bit different these days. But Noah and I had the perfect Sunday. Pancakes for breakfast, baking, books, a walk to visit a friend and playing in the garden
A child free day in London with friends we haven’t seen in a long time 🇬🇧
In this decade I have left home, lived in 4 different places, moved country, learnt a new language, climbed Kilimanjaro, worked at the Olympics, got married, welcomed Noah into the world, made friends, improved my baking, travelled and most recently become German. The last 10 years have been full of wonderful moments and some difficult ones. Let’s see what the next 10 years brings. Happy New Year 🎉
%d bloggers like this: